About The University of Georgia

The School of Social Sciences can be proud of its fruitful cooperation with local, regional and global think-tanks, non-governmental institutions and universities and is actively engaged in academic and policy relevant discussions in the fields of contemporary global and regional security challenges, globalization and transparency. In 2019 it launched a discussion platform, initially titled the UG Security Conference 2019 and ultimately transformed into the UG Security Platform (UGSP), within which the most acute issues of regional security can be discussed and policy recommendations formulated.

Established in 2004, the School of Social Sciences of the University of Georgia (UG) is a leader in providing best academic curricula and training in the areas of political science, international relations, journalism, PR and psychology. The UG spent significant efforts in providing best academic and infrastructural standards in line with the modern requirements. The School in particular puts a great emphasis on the healthy mix between the value of innovative study approaches and the benefits of traditional teaching. Students are offered the variety of opportunities to put test their knowledge in the practice, undergo training and internships, and acquire skills and knowledge, in the specific study areas critical for future employment.

Students can apply both for BA and MA-programs and decide which area studies their want to concentrate on, for deepening their academic qualification. So, for instance in the field of international relations, the School introduced a newly developed MA-program of Global and Security Studies, where applicants can decide to follow one of the two trucks of the program (Defense and Security, or Global Governance and Diplomacy). Furthermore, for those, who are aiming at continuing their research and career primarily in academia, the School offers a newly updated doctoral degree program in political science.

The School of Social Sciences is a part of The University of Georgia, a biggest private high educational center in Georgia, bringing together up to eight thousand students in six independent departments/schools (social sciences, law, technology, humanities, business administration, and health science). Since its entry into the national system of education the university grew rapidly and increasingly established itself as an attractive educational center in the region, attracting more than 500 international students annually from various regions of the globe. This tendency was especially noticeable by the rapid growth of student number from countries such as Iran, Iraq, Turkey, Israel, Pakistan, India, and Nigeria. Thanks to the suitable geographic location of Georgia, its cultural mosaic serving as a bridge between the Europe and Asia, and liberties provided by the society undergoing deep liberal democratic transition, more and more young women and men from the neighboring regions decide to come and study here. The UG offers a big advantage to its students by joining the educational programs that share the highest European educational standards and are fully recognized by EU-countries. The UG is highly engaged internationally and pursues the objective of developing tailored educational programs for the students/scholars across the region and furthermore, to strengthening values of liberal and open societies worldwide. 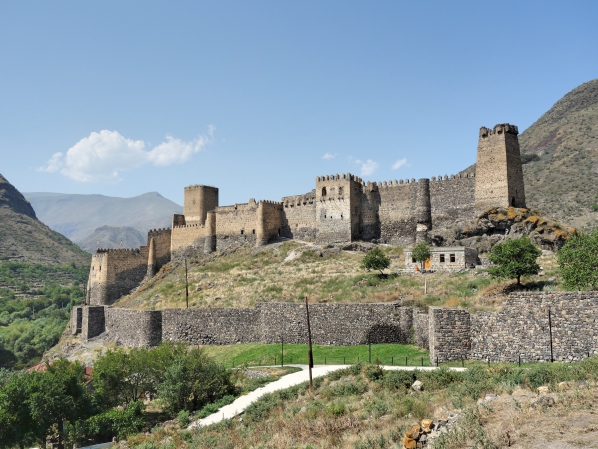 At more than 150 meters along and more than 30 meters wide Khertvisi is one of the biggest fortresses in Georgia.

Situated in the Meskheti region of southern Georgia, Khertvisi Fortress (10th -11th centuries) is one of the most ancient and functional fortresses of the whole feudal lord period.

Even though the date of its construction date is unknown, at one point it stood on the Great Silk Road. The first data of Khertvisi reach to us as a legend it is known as a fortress which exhibit the resistance in Georgia to Alexander Macedonian who passed through here during his Eastern campaign and that, at that time, there was a city fortress at this site.

The castle was built on a rocky ridge at the confluence of 2 rivers; the Paravani and the Mtkvari in Georgia. These rivers flow through deep canyons and thus the castle guarded an important road from the Byzantine Empire to the Caucasus. It consists of an elongated castle and a restored outer wall. Inside the castle are a five-sided watchtower, a square keep, the 10th century St. George Church and the remains of a tunnel leading from the castle down to the river below.

The University of Georgia